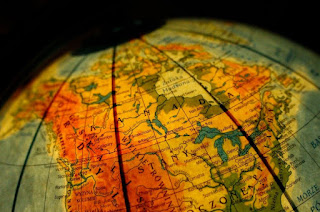 Thanks to Atlas of Improbable Places by Travis Elborough I visited some that were totally unknown to me.

If you want to discover a few of them, just read on! 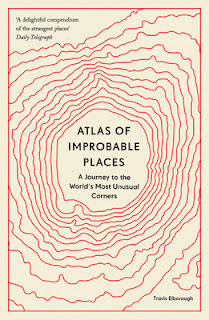 Travis Elborough goes in search of the obscure and bizarre, the beautiful and arcane. His unique atlas shows you the modern world from surprising new vantage points. Discover the secret Soviet city of Zheleznogorsk and the church tower of San Juan Parangaricutiro, miraculously still standing as the sole survivor of a town sunk by lava. Explore the underground realms of Beijing and Berlin, dug for refuge and espionage, and the floating worlds of remote Palmerston and the macabre Island of Dolls.

The truths and myths behind these hidden lairs, forgotten cities and  improbable wonders are as varied as the destinations themselves. These curious places are not just extraordinary sights but reflections on our relationship with the world around us.

Here's my review of the book:

"Reading gives us someplace to go when we have to stay where we are."

In this book 51 places are discussed and they're divided in 6 categories:

Although I'd already heard of some of the mentioned places, the author always succeeded to learn me some new facts about them.

Other places were totally unknown to me and thus formed interesting introductions to some of the earth's strangest places.

As you can also read in the extensive biography on his website, Travis Elborough is an acclaimed author and social commentator. He already wrote several books, including 'Atlas of Vanishing Places' which won the 2020 Illustrated Book of the Year Edward Stanford Travel Writing Award.

In 'Atlas of Improbable Places' every continent is represented and various environments are talked about (both natural ones conquered and artificial ones made by humankind).

The only downpoint was the fact that the underlying explanation was always quite negative. The places that were selected for this book didn't often appeal to that positive 'sense of wonder' you can experience when discovering new places. They rather showed the darker side of humanity (war, discrimination, …) and of nature (disasters, inhospitable places, ...).

But besides that, the info which was given always contained interesting facts and certainly prompted me to look for footage  So if you'd like to know where you can find the door to hell, the creepy doll island or some of the other interesting discussed places, feel free to head over to my blog.

*Thanks to NetGalley and 'Quarto Publishing Group – White Lion, Aurum' for providing a digital copy of this book in exchange for an honest review.

Have you ever heard of Hashima (Japan), also known as Battleship Island?

If not, you still may've already seen it without knowing it, as it appeared in the James Bond-movie Skyfall.

What do you know about the Aral Sea in Uzbekistan?

Have you ever seen images of the boat cemetary of Muynak?

Even though it's much closer to home, I never heard of the Euro Banknote Bridges in Spijkenisse (Netherlands):

Did you ever wonder how the door to hell would look like?

You can experience it at the Darvaza crater in Turkmenistan!
Apparently it isn't entirely clear when and how this phenomenon started. More about the different theories can be heard in this interesting BBC-video.

One of the theories is explained in following movie from Atlas Obscura (a book I'll certainly talk about during another blogpost):

Despite the fact I've got a collection of beautiful dolls, I don't think I will ever set foot on the creepy Doll Island in Mexico City.

Would you, after seeing this movie?

What do the last mammoths and Ada Blackjack have in common?

Wrangel Island, a Russian island in the Arctic Ocean!

Even though Ada Blackjack isn't mentioned in the Atlas of Improbable Places, the story of this courageous woman is so interesting that I wanted to share it with you.

Did you know she was called the 'female Robinson Crusoe'?

Posted on September 12, 2021
Email ThisBlogThis!Share to TwitterShare to FacebookShare to Pinterest