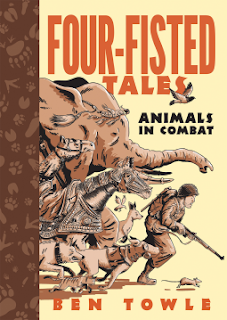 Books about war … some people like to read them, others don't.

But … even though I belong to the latter group, the graphic novel Four-Fisted Tales by Ben Towle approached the subject from such an original angle that it kept me totally hooked from beginning to end!

Animals have always partaken in wars.
Everyone knows about the more common examples like war horses, courrier pigeons, …
And most of us have heard of Hannibal's elephants during history lessons or Latin classes.

But did you know that …

… boats often had a ship's cat to hunt rats and keep their food reserves safe?
... one of those felins even got a war medal for his heroism?

… dolphins are trained since the '60s to accomplish several important military tasks?

… seagulls can be conditioned?

… their training program was founded in Belgium and I didn't even know this about my own country?

Ben Towle did a magnificent job to give all these and other war animals the credits and honours they deserve.

This four-time Eisner-nominated cartoonist even adapted the colour palette of his drawings to give the reader a more authentic feeling. Camouflage colours like khaki, brown, ochre and black set the tone. Curious to see it for yourself? Some preview pages are available here.

As you can read in his biography he's from a Navy family himself, which adds an even more personal touch to the whole.

More information about this talented artist and his works can be found on the website: http://www.benzilla.com/

Four-Fisted Tales is definitely a book that will appeal to lots of readers.

As such it would also be perfect to use at school, covering different time periods, geographical places, interesting animal trivia, ….

Although every animal is discussed rather briefly, lots of specifics are given: their exact names and the rewards they received, names of places and specific regiments who fought there, …

Thus this book forms a very good starting point for those whose curiosity is piqued to look up further information.

As this was absolutely the case for me, I gathered some of the most interesting footage and articles (see below).

There's only one downpoint to be mentioned: the book ends with a section about courrier pigeons.

Of course, these deserve a part in this book as their role has been very important. But it seems to me that this is more common knowledge and that consequently the book had better started with this information. That way it would've been possible to build up to the lesser known - and therefore more 'spectacular' - war animals towards the end.

This is the reason why my end rating is actually 4,5*.

But the original subject, interesting information and beautiful graphics are definitely worth rounding up!

*Thanks to NetGalley and Dead Reckoning (imprint of the Naval Institute Press, the book-publishing division of the U.S. Naval Institute) for providing a digital uncorrected page proof of this book in exchange for an honest review.

"They had no choice."

This first phrase immediately learned me about a monument I never heard of before.

Apparently it lies next to Hyde Park.

If you want to take a look:

Do you know the only dog ever to be traded as a prisoner of war?

If you want to learn more about his adventures, you can discover them here:

Not only dogs, but cats can be real war heroes as well.

Ships' cats were very common, but in the UK for example they were no longer allowed since 1974 (see article).

One of them, Simon, is the only cat ever to have won the Dickin Medal (in 2018), the highest British honor awarded for animal displays of bravery in battle!

Read more about his heroic deeds in this article.

As dolphins are extremely intelligent animals, they were trained in different military programs since the '60s.

In following movie you can see how they're used to protect the U.S. Navy.
But if you prefer a shorter version in which you can see several of their duties, you can read this article.

On a more funny note, let's meet the world's most famous penguin!

And then there's the story of the giant African pouched mine-detecting rats.

In this very short movie, you can see how those relatively small animals are of great importance in post-war environments and how one of them, Magwa, has been awarded the PDSA Gold Medal:

At the end there's a mentioning of APOPO, the animal charity who trains these HeroRATs.

Can you imagine my surprise when I discovered that they are located in Belgium?

Even though they exist already more than 20 years, I never heard of their important work!

You can read about their interesting history and how it all begun in 1995 here.

To finish this article let's discover the heart-melting story of Wojtek.

Posted on September 26, 2021
Email ThisBlogThis!Share to TwitterShare to FacebookShare to Pinterest